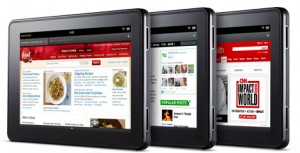 Everyone has been talking about the tablet market. Especially about the prices of tablets. Ever since HP decided to pull out of the market and dumped its discontinued tablet with its discontinued OS, it became clear that price is a much bigger hurdle for buyers than most expected. Enter Jeff Bezos and the new Amazon Kindle Fire. A $199 tablet that could be the biggest change to the tablet market since the introduction of the iPad.

The Kindle Fire has been based on the hardware of the RIM Playbook, but with Amazon’s own Android based operating system that seems more than enough to offer a good user experience. Obviously I have not had my hands on one the people who have, seem to be pleased with it. A good reason might be that Amazon firmly believes that everything you use on the tablet you should be able to use from the cloud. And that makes the 8Gb storage limit much more believable and practical.

Lets be honest, the biggest thing in the Kindle Fire launch is the new Silk browser. the Silk browser is a new angle that Amazon is taking with their Elastic Computing Cloud (EC2). They already offered the power and storage of their servers to startups and anyone who wanted to take an advantage of their speed. But now they are offering it to everyone through the Silk browser.

The Silk browser helps you access webpages smoother and quicker than other tablets. Why? Well, basically because you do not browse the web yourself, but Amazon’s EC2 does it for you. You send out the request and EC2 gets the page and repackages it into something a lot simpler and easier to load for your Kindle Fire. And as you will be browsing pages that others browse as well, those pages can be served faster than you would get them from a conventional browser.

However, there is a downside to Silk. And that is called EC2. That is, if you value your privacy. There is a reason why Amazon offers the Kindle Fire at $199. It is called sponsorship. Because Amazon is going to learn endlessly more from your tablet than any kind of customer research can teach them. They will go with you on your surfing trips, your trips to find the best deals, your trips to relate to your social networks and everywhere else. And it will do it in the nicest way possible. So, Google, where does your chromebook stand now?

In all honesty, the Kindle Fire is a nice tablet. It looks nice, seems to be fast enough and with Amazon’s appstore for Android you have all the possibilities you get on tablets twice the price. The Kindle Fire is going to have a pretty big impact on the tablet market. Here’s for hoping there will be EC2 privacy settings.