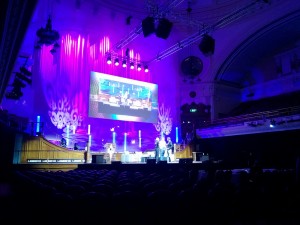 This morning Chris Guillebeau shared three quick lessons that he had learned while he visited every country in the world.

Time and Money
If you cannot understand all of the different costs of a project, then the project or the quest becomes much easier to pursue and to complete.
For Chris personally, he just wanted to travel. And then he changed it to visiting 100 countries in the world. He thought about it and started to share it. But then he got the criticism from someone that visiting these countries was not going to be hard, all you need is enough time and money. Which caused him to structure his quest. Which meant figuring out what he had to do to succeed and what the cost of succeeding would be. And then he could break it down and share it as it all grew and became possible for him.

Experience produces confidence
Actually going and doing, helps you become confident that you can do it. Start with the smaller things first, then build up. It will help you grow. As you succeed in smaller things, you will help you understand that you can succeed at the big goals as well. He has seen others look up to him and playing down their own quest, because his had been much bigger. But whatever your quest is, it is the most important thing for you to focus on. The most important thing in your life at that time.

You are not alone
The new demographics are less about where you come from, but more about psychographics. About shared views, shared values etc. In essence, you are not allone. If you have a crazy idea, if you believe there is nobody as crazy as me, then there certrainly other people all over the world that share your passion. That want to make the same ideas succeed. So, it has helped him a lot to see that other people had the same dream and made it succeed. And it helped him to tell their tales to grow in his own understanding of his own quest.

Two suggestions to live by:
Get your own quest. It is important. As Elon Musk said, we spend too much time on small things. And we need to move up in the world and build a bigger thing. And all the people Chris has talked to that have gone on to try their own grand adventures, and they shared with him that at some point they had just decided to go for it. Whether it would succeed or not, it was important for them to do it and it changed them.

Find a way to tie your quest to something that makes the world a better place.
There are so many opportunities to mean something to the world. And it is not meant to sound heavy or be a heavy responsibility, but it is about sharing and helping build the world. And doing that is not just about giving things up for others, it is also about the fact that through doing that, it will contribute to us. It will change us, build us up which he shared he experienced when Chris and his wife worked with an NGO on a hospital ship.

A great story. And yes, I want to live up to at least part of that. That is why I am building TechPastors. Because I have a dream, I want to pull it off and I believe that I am not alone in believing that the church and Christian organizations could really do with a clear view of what you can do with technology. So, I am going to push forward. Want to help? Let me know!