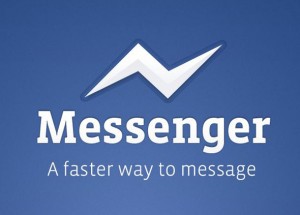 Last night Facebook launched their new Messenger App. The app is a stand separate app that allows you to quickly exchange messages with your friends. It has notifications and it allows you to send out group messages. These features make it an instant competitor for SMS and other messaging apps that try to provide an alternative to SMS. However, it comes from Facebook, instantly taking along its 750 million active users. These users need to decide whether they want to keep all their communications in one place -Facebook- or whether they are going to spread it over several different services. And I bet you can guess what the answer will be. 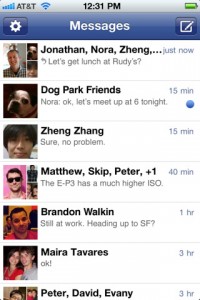 Not only will Facebook’s Messenger app be annoying to the telecom providers that see yet more SMS income seep away through its data services, but it might also mean the end to Blackberry. Over the past years Blackberry has been building its userbase more and more on their Blackberry messaging app. And that has gone great so far. Well, except for the occasional London riot. Many people have taken the plunge and spent a good amount of cash on getting a blackberry, because you don’t need much money to have a data connection and sending your text messages is then free. So you are just as connected, only cheaper. The Facebook Messenger app is going to change the reasoning. Now you can grab a cheap Android phone, which are priced below the Blackberry. You can run a Facebook messaging app on, which will do the same as the Blackberry messenger app. But now you can continue your conversation on your computer. Or any other online device. And with the full Facebook app added, you have all the access to your friends online as well. Great for users on a tight budget. And great for Facebook as well, as you only need to connect to be able to message. That makes you want to be friends.

A great step by Facebook. And it leaves me to wonder what will be their next. Though I have a thought or two. For now the Facebook Messenger app will only be available in the US, but it will become more widely available in the future. You can check it out now at the American iTunes store and Android Market.

How can you take a brand like @wacom serious when they still do not have drivers for their products for Mac OS X 13? They state: "the Wacom Driver team is working on a compatible driver to make it available as soon as possible. Please delay the installation of the new OS" #stupid