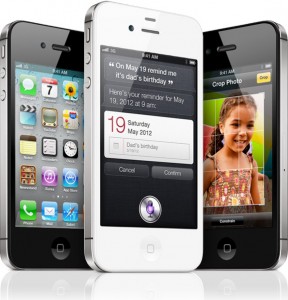 Today Apple launched their new iPhone 4S. The iPhone 4S still has a glass back, a square outlook and a 3.5″ retina display. But beyond that, it is all different. It has the new A5 processor for more speed. It has increased WIFI speeds, so it will be faster. It has a new 8 mega pixel camera with a new backlit sensor with better software to take better pictures and shoot 1080p video. And with it’s new dual core graphics processor, it can compete with game consoles. Not in the least because the new iPhone 4S will come with mirroring through AirPlay, enabling you to show the screen on your TV. Oh, and they have learned and included two antenna that switch intelligently to ensure you are connected. The iPhone 4S also has a new battery that will make sure it lasts longer than any iPhone before. Personally I would be interested to see whether it will last a full day. I have been waiting for a phone that can do that for years. All in all, it is a great new phone, but what makes it nicer is iOS 5.

iOS 5 comes with a truckload of new features that will make the iPhone just nicer to use. And the good thing is that it is compatible with most iPhones and iPads. That means that I can still run it on my iPad 1 and you could still run it on your 3GS. Notifications have taken a leaf out of the Android book. It is a pull down now and you can immediately go to wherever the notification came from. Naturally Apple gave iCloud a good part of the stage today. Mainly because so much in iOS 5 will be moving towards the cloud. To sync with your other idevices mainly. Sharing your photos all over your iOS devices, sharing your music with iTunes Match, storing things you want to read later etc.

And so the technobabble goes on. But what really got me going, is the new SIRI voice assistant. Yes, I know, it will be English mainly first, but they claim it will be there in other languages as well. So who knows, it might learn to pronounce our Dutch names at some point. But the intelligence is really cool. Asking whether you need an umbrella gets Siri going to find out what the weather will be like in your area and then telling you whether you need an umbrella based on the forecasts in your area. It can track where you are and notify you of things you need to do when you get close to a specific place. And it can combine your information and your question to set appointments for you or reschedule them with simple human questions. Yes, it all looks awesome, but I am still skeptical. Having first used voice recognition in 1999 for a project, I am always expecting it to fail somewhere. And my Android speech recognition does that as well. 85% of the time it spells out the tweets I dictate quite well, but that other 15% often make it an annoying application.

Yes, I am looking forward to the new iPhone 4S. It seems to be a nice phone. Will I pre order it? I am not sure yet. Apparently the iPhone 4S goes on pre-order on the 7th of October with the first countries getting it on the 14th. The Netherlands will have to wait for the 28th of October with 20 other countries. Prices are set to $199 for the 16Gb, $299 for the 32Gb and $399 for the 64Gb version in the USA. Prices for other countries have not been released yet.

UPDATE: The French Apple store currently shows that the iPhone 4S will be available without a contract starting at € 629. No other prices are mentioned, but with Apple logic that might mean that the €629 is for the 16Gb, €729 will be for the 32Gb and it might be as much as €829 for the 64Gb. Pretty pricy phones.