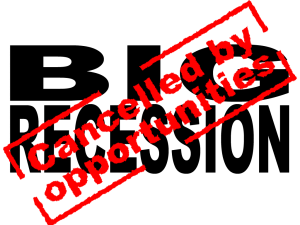 Yesterday I visited one of the many New Year receptions of our region. It was hosted by the local chamber of commerce and this meant that the chairman did his annual New Year’s speech. Unfortunately he forgot who he was addressing. His speech was full of the terrible economic climate, the changes we all need to make to not go bankrupt and how the chambers of commerce are going to be reorganized to help entrepreneurs do that. He forgot that he was addressing entrepreneurs. I bet his speech would have gone down welll with governmental types. But not enterpreneurs.

Walking around during the reception part, every single entrepreneur I talked to told me that they are expecting a nice 2012. They all saw new possibilities for their companies or their products. Some of them are hiring for that growth already. Unanimously they thought the speech was crap.

When I headed back home last night, I was happy to see that none of the outside factors influenced the real entrepreneurs. They are not bothered with what the outside world says, they see an opportunity and they move on it. And those will be the entrepreneurs that will make it. The ones with vision for their future, passion for their company and a drive to succeed.

Are you influenced by the news on the economic climate? Or are you seeing new opportunities for you and your company?

How can you take a brand like @wacom serious when they still do not have drivers for their products for Mac OS X 13? They state: "the Wacom Driver team is working on a compatible driver to make it available as soon as possible. Please delay the installation of the new OS" #stupid