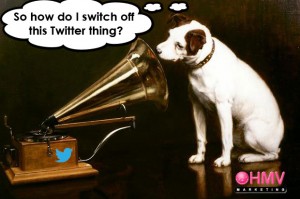 HMV was hot news on Twitter today when staff took over the retailers twitter channel. I am not going to dive into the whole deal about financial troubles and layoffs. It is a tough time for retailers in the business HMV is in and with their new owners it might take them some time to get back on top. In the meantime it has been interesting to see how new technology has been completely passed up on in the first steps of restructuring.

I will try to set the scene based on the -now deleted- tweets by HMV staff this afternoon. Apparently HMV had an intern make the HMV Tweets account on Twitter. Nothing special. Even big companies choose to let interns rule their interpersonal communication with their fans. A good idea? Not at all, and I can give you lots of  reasons why. However, that is not the purpose of this post, so I will leave them out.

So, HMV had a twitter account and they have mainly used it to communicate new releases, congratulating the stars on their own label and congratulating followers with winning their own competition. They did do a single personal retweet of someone calling everyone to purchase from HMV to support the high street. So, nothing too personal and relational on there. But as people love their media, they still have thousands of followers. There are two sides to that story. Yes, you can dump your messages to almost 70 thousand people as a corporate. But the people holding the keys to that account can also reach some of your most loyal 70 thousand customers with one simple click.

And that is what happened. The person(s) who tweeted this have been seeing the demise of HMV as something they could have been able to turn around. It might have been someone who has really wanted to put in more than their share to make HMV work again. Or so the tweet seems to suggest when he or she says: “However, when the company you dearly love is being ruined and those hard working individuals, who wanted to make hmv great again, have mostly been fired”. So they broke the silence they were bound to by their contracts and came out with what was happening at the offices. The bad news spread quickly over twitter and it did not take long before the news picked up on it and articles started appearing on the BBC and ITV website.

Will this affect the retailer in the long run? Possibly. After all, the tweets first reached their 70 thousand most loyal followers. So what should have been done? It is hard to say, but it does start with control over the social media channels of your organisation. Especially when you are going to be giving the company a lot of bad news, it might be wiser to make sure the account is under control of someone you can really, really trust. Perhaps only for that first hour after the bad news hits, perhaps for longer, but make sure there is some kind of control. After all, these are channels that are now seen as at least as important for your communications as your official press releasees.