How many apps do you want?

At LeWeb I met a number of startups. They ranged from not very interesting to very interesting. However the thing that really struck me when talking to them is that they are still so focussed on being the one platform for their users. Most ask you to import your friends, or ask you to at least invite them to their service. A lot of them work only with the information in their own databases and rely on their users to fill them. Frankly, I was disappointed. As an example, I was approached by a startup which operated only on the iPhone and which could recommend places to go based on what others had said about it. The good part of this app was that it connected with Facebook. One less account to worry about. The bad part was that they gathered the information my friends had put on Facebook through their social checkins through other apps. The main problem with this was that I needed to use the app to find a place where I could go. Then I needed to open an app to tell me where to get there. After I had arrived, I then needed to close the app and check in through a number of other apps. I would then use other apps while I would be at the venue for whatever I would want to share with my friends. And at the end of the night I would have to open their app again to rate the venue, tell others what I had done and share that through their network. Honestly? For me, that makes it useless. If you are building an app, try to incorporate the most obvious things into your app so that it your user is not hassled by it, but gets the feeling that the app makes life easier for them.

In the case of this particular app, it would have been much easier if they would have chosen to include checking in on the most available sites such as Foursquare, Gowalla, Facebook pages etc. And it is not that hard. Most offer an API which you can use, making it relatively easy to incorporate.

What it really comes down to is determining how your app can make your user’s life easier. Because that is the reason we use apps. We want them to add to our life instead of making it an extra something that we need to do. So yes, it is great if “there’s an app for that”, but it is even greater if there is a single app that follows through the whole process that the user is in. And better still if that is done regardless of whether the service the user wants to use is part of the developers’ stable. If that is something you can do for your customer, you might just be on to a winner.

Today is the second day of LeWeb, the web conference in Paris that by now, you have heard everyone talk about. As you can’t be here in Paris with us, the kind organizers of LeWeb have set up a live stream for you to enjoy. Look below for the live coverage both in video as well as on twitter.

This is the live stream for the Plenary:

This is the live stream for Plenary II on Thursday: 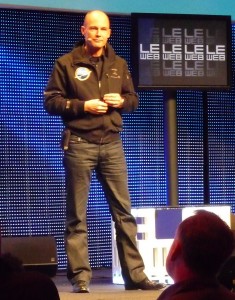 Today is the first day of LeWeb, the web conference in Paris that everyone is, or should be, talking about. If you can’t be there for whatever reason, fear not, you can still take part in all the talk. You can follow everything at LeWeb through their live stream.

This is the live stream for the Plenary:

This is the live stream for the Startup competition on Wednesday:

Getting ready to go – are you coming?

I am really looking forward to this. Tomorrow I’ll be leaving to LeWeb with Erno Hannink. Four days of Paris, I won’t have time to see the Eiffel Tower and only glance at the Notre Dame in passing, and I am over the moon about it.
I am really looking forward to the LeWeb conference this year. Naturally I will be writing about what I hear and what I come across. You can find my posts here and on pitchstops.com.

If you are at LeWeb and would like me to do a video interview or write about you, just come up to me and let me know. Give me a shout on Twitter and lets make an impact starting at LeWeb.

Get a free pass to #LeWeb!

Ok, I just couldn’t let this one pass. Today you can get yourself a free pass to LeWeb, the greatest Web conference in Europe. How? Just by convincing them you are the one who really, really, really needs to go. Head over to their facebook page and they will pick a winner each hour between 9am and 1pm pacific time. That means there still is time left to think of the most original, creative, reasonable, interesting, innovating reason for you to go.

Head over to the Facebook page and grab those tickets!