Does the Chrome still need to be polished? 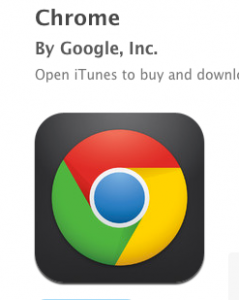 To be honest, after my last post, I really wanted to like Google Chrome for iOS. I really, really did. Yes, I rely heavily on Google’s products. I use gmail and have three apps accounts with all the assorted documents. I use both Chrome and Chrome Canary on my Mac and Chrome on my Nexus S. So, when Google announced Chrome for iOS, that sounded great.

Some of Chrome’s functions sounded like someone finally got it. Especially sharing open tabs across devices. I have that often. I have been browsing the web in the evening on the couch, then come across something I really want to continue on the Mac the next day. And all there was to do with Safari, was copy the link and send it. Or type it on the Mac the next morning. All very annoying.

And yes, that feature works. I can now see the tabs from my Mac on my iPad, on my Phone and all the other ways around. However, Chrome has one major problem for me. And it is something that always happens with Google. I don’t know why, but it always does. Google Chrome does not play well with its own products. And I mean gmail specifically. To be honest, there are only two tabs that remain open on my iPad at all times. One is Gmail. And it works fine on the Safari browser on the iPad where it will show the mobile version. However, on Chrome, it tries to load the desktop version and fails miserably. When I leave it to load the page completely, it crashes. When I want to select messages before it finishes loading, it opens them, then crashes. In all honesty, whatever I do, in the end, when the page finishes loading, it crashes.

I know. It is probably just me. Who in their right minds still possesses the Original iPad, right? And still uses it. I mean, Apple has more or less stated that when they decided not to bring iOS6 to the iPad one, though the technology can still take it. Maybe that is the trouble with Chrome as well. I don’t know.

But in reality, there might be something that is flawed in the basics of Google Chrome. Sharing the tabs is great. However, some of the sites just need to be viewed in mobile instead of the full version you use on your computer. And there seems to be no intelligence filtering that out. That, even though I love Gmail’s desktop interface, it is unusable on the iPad where fingers are bigger than mouse pointers. So, that needs the mobile interface. However, others like Facebook, I want to use in their desktop guise. Oh, and there is the minor issue that I don’t like to have the browser I use crash every five minutes.

Get that sorted though, and Chrome might be worth using for me.

So, could it be that Lewis Hamilton just wanted to make the season more interesting? 🤔